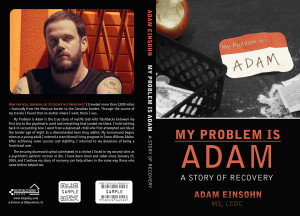 MY PROBLEM IS ADAM

A STORY OF RECOVERY

My Problem is Adam is the true story of my life told with flashbacks between my first trip to the psychiatric ward and everything that landed me there. I hold nothing back in recounting how I went from a depressed child who first attempted suicide at the tender age of eight to a disenchanted teen drug addict. My turnaround began, when as a young adult, I entered a transitional living program in Coeur d’Alene, Idaho. After achieving some success and stability, I returned to my delusions of being a functional user.The ensuing downward spiral culminated in a choice I faced in my second stint as a psychiatric patient: recover or die. I have been clean and sober since January 25, 2005, and I believe my story of recovery can help others in the same way those who came before helped me.

In my own words: