A cat video killed my chance at Internet fame

Written by Adam Einsohn on June 15, 2016. Posted in Pop Culture/Entertainment

Last week on Conan O’Brien’s late night show he ran one of his semi-regular bits known as fan corrections, and it reminded me of a blog post I wrote a couple years ago. I started a blog under a pseudonym because I was concerned at the time about maintaining some shred of online professionalism as an aspiring educator and counselor. Somewhere along the way I said fuck it. No one’s reading this shit anyway, and if enough people start reading it that I become known for being some crazy blogger, then I’ve got you call “one of them good problems.” So this week I’ll reach into vast vault of two posts from my previous blog. Enjoy!

Will you still love me?

Written by Adam Einsohn on June 10, 2016. Posted in Pop Culture/Entertainment

The book was better.

That’s the cliche, right? But why is it true so often, even when the author adapts his or her own book into a screenplay? In most cases the answer is pretty straightforward: it takes hours upon hours to read a novel and that’s usually split up over several days or even weeks. During that time, we the readers can allow the narrative to marinate. By comparison, even a movie done well – or well done, if we’re going to continue the analogy – can taste like the details were slathered on and the story was tossed in the oven. I can only think of two examples to the contrary.

The most thoughtful “no” I’ve ever received

Written by Adam Einsohn on June 2, 2016. Posted in Publicity

Some of the simplest statements we hear stick with us for years. I heard this from my case manager when I was in rehab back in the beginning of 2005, and I’ve since imparted this pearl of wisdom to countless others: No is a complete sentence. He shared that with us and I’ve continued the tradition to convey the importance of boundaries. When we don’t want to do something unhealthy (e.g. drink, use drugs, hang out in toxic situations with toxic people), we don’t need to offer an explanation. If we’re going to say anything at all, it can be that powerful one-word sentence: No.

Losing a TV series is like losing a friend

Written by Adam Einsohn on May 24, 2016. Posted in Pop Culture/Entertainment

It’s strange for me to think there was a time when I didn’t religiously follow any TV series. Sure, I watched my after-school sitcoms and TGIF was a big deal back in the day, but I completely missed out on the beginning of what has come to be known as “The Golden Age of Television.” Beginning with the premier of “Oz” in 1997 and ending with the finale of “The Wire” in 2008, HBO had an 11-year run of four of the greatest dramas of all time overlapping on the same network (the other two being “Six Feet Under” and, of course, “The Sopranos”). My missing out probably had a lot to do with the fact that I only religiously followed how much dope I had left in my bag, how many pills I had left in my bottle, and how much beer money I had in my wallet. Keeping up with a TV show was too much of a commitment at that point in my life.

A lesson in ownership from my students

Written by Adam Einsohn on May 16, 2016. Posted in Education

“Parting is such sweet sorrow.” “Don’t cry because it’s over. Smile because it happened.” “One fish, two fish, red fish, blue fish.” One of those quotes is from Shakespeare, and two of them are from Dr. Seuss. I’ll let you guess who said what and which one has nothing to do with the rest of what I’m about to write. So, when it comes to letting go of your betta fish … never mind. Seriously, though, I did have to say goodbye to a very special group of young people recently.

Written by Adam Einsohn on May 8, 2016. Posted in Addiction

For mothers of boys, it must seem like much of existence is devoted to making sure their male offspring don’t hurt themselves. Men need women in their lives for many reasons, but steering us away from our intrinsic, self-destructive stupidity masquerading as curiosity ranks near the top. “I wonder what’ll happen if I stick my whole forearm in that anthill.” Mom wasn’t there to stop me, but she was there to coax me out of hysteria and apply ointment to the bites.

Written by Adam Einsohn on May 1, 2016. Posted in Addiction

Someone recently listened to my interview with Josh Eccleston on his “Jobcast” podcast, bought a copy of my book, read it, and reached out to me with some questions. I did my best to answer them, and I also tried my hardest to avoid letting this get to my head. Oh what the hell? Someone I’ve never met listened to my interview, bought a copy of my book, and e-mailed me! HOLY SHIT! Time to assemble an entourage!

Run for your life

Written by Adam Einsohn on April 24, 2016. Posted in Health & Wellness

I’ve heard people who’ve completed half-marathons say, “Yeah, I’m only half-crazy.” First of all, that’s selling short one hell of an accomplishment. A lot of people won’t run 13.1 cumulative miles over a lifetime. On the other hand, I’ve never been one to take too kindly to people challenging how crazy I am. 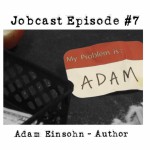 Interview on the “Jobcast” Podcast

Written by Adam Einsohn on February 14, 2016. Posted in Publicity

Check out my interview on “Jobcast”